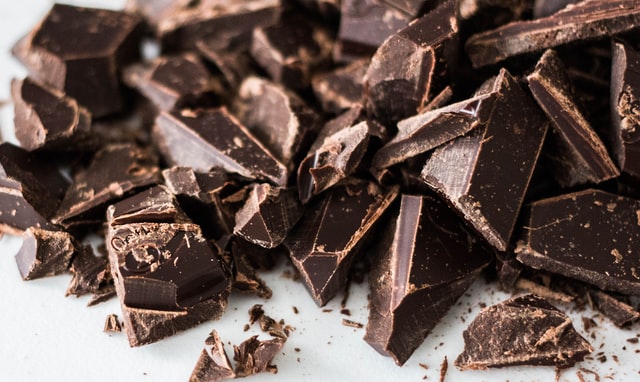 Becoming a vegan brownie business in 2016 came with its challenges, one of the biggest being how the heck we were going to replicate a product people already know and love without using any animal products. The answer was already right in front of us: more bloody chocolate.

From the start, Gemma always wanted the focus of Dark Matters brownies to be on great quality chocolate. At the beginning of her chocolatey career she worked alongside, and learned from a skilful chocolatier who herself had trained with Paul A Young. This gave Gemma a deep and intense appreciation for chocolate as a complex and fascinating product.

Most brownie recipes are high in sugar, flour and cocoa powder, so demand a lot of fatty, wet, animal based ingredients like butter and eggs (and sometimes randomly gelatin?! Blurgh.) This is NOT the Dark Matters way.

When we became a vegan business, taking out these ingredients wasn’t a huge dilemma as chocolate binds dry ingredients, instead of resorting to butter and eggs. So our fudgy brownie dreams continued to live another day!

When Dark Matters brownies began in 2012, Gemma knew it would need to have dark chocolate at its heart. From working in the industry, she knew dark chocolate wasn’t as accepted as milk chocolate, with milk outselling dark 10/1. However, knowing that the rich complexities of chocolate could help her create the ultimate brownie, that didn’t put her off.

Gemma wanted to not only bring banging brownies to the masses, but to also open up the idea of using higher percentage, and better quality chocolate in the process.

After a LOT of research to find the best chocolate for the ultimate vegan brownies, Gemma chose a certified Organic and Fairtrade 70% dark chocolate couverture to use. This is the same high quality chocolate used in premium chocolate making.

That’s why 70% dark chocolate is either the first, or one of the first two ingredients in all of our brownie recipes, bar none.

Can dark chocolate be sweet?

With Gemma’s dedicated baking skills, she has been able to vary her brownie offerings. So our Purist is the darkest tasting – more like a dark truffle flavour and texture. Whereas the Salted Caramel and Brookies contain extra sweetness from the additions of caramels and cookie dough.

So despite Dark Matters making it sound like our products are only for dark chocolate aficionados, we really do have something for everyone… unless you hate chocolate.

NOTE: We currently dispatch once a week, mid-week. Time from ordering to dispatch: Up to 5 working days. Sent via DHL Courier or Royal Mail Tracked, check your email for tracking :) Advance orders may be made using Comment box at checkout. Please email if you have any questions! Dismiss